The human brain, that constitutes 2% of our body weight but consumes 33% of our energy, is the most prized piece of real-estate in the world. Business leaders in particular have a high reliance on the brain, considering the amount of analytical thinking, the number of small and large decisions they take and the influence their decisions have on company performance and employees. ET-ILC members met Kumaar Bagrodia, Founder, NeuroLeap – an  applied neuroscience firm, and looked at non-invasive tech-based methods that can be used to assess the function of the brain and improve mental health and productivity. 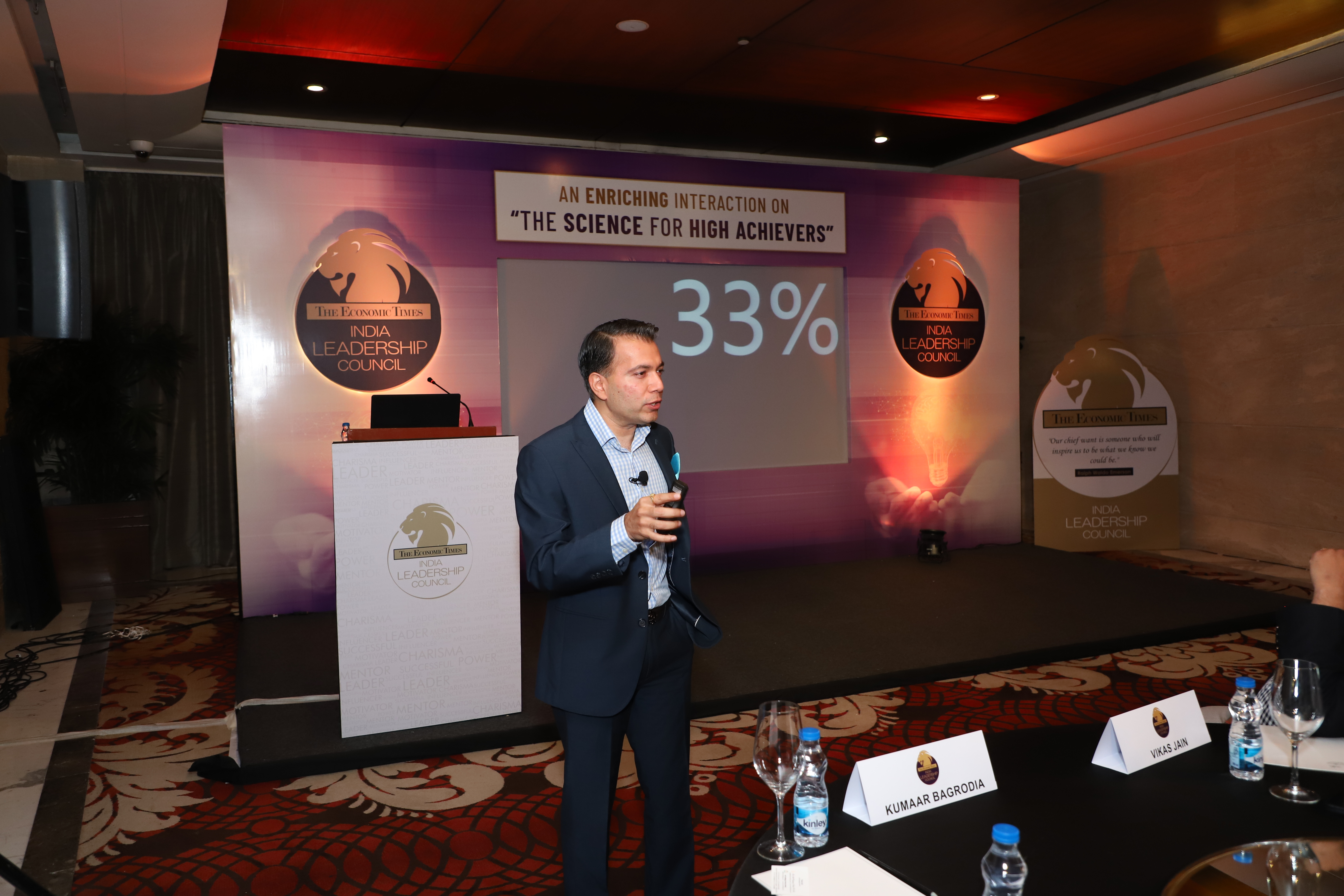 ET-ILC CEOs believe that many individuals in top management roles suffer from poor sleep and the ill-effects of stress even though most of them meditate and have a regular exercise regimen.

According to the Indian Council of Medical Research, 2017 data indicates that close to 14% of India’s population suffers from mental disorders; depression and anxiety being the most common. While many of us casually speak of “depression” and “anxiety”, and hear words like “trigger” and “breakdown” frequently, we tend not to be aware of the clinical components. Even though there has been a tremendous change in our attitudes and acceptance of those who suffer from these issues in the last 5 years, there is still a huge stigma that remains attached to them and corporate India is affected by it too.

Research by Bupa Global, the international health insurer, states  that 64% of senior business leaders battle mental health conditions like anxiety, stress and depression, and work is seen to be the main cause. While the awareness around these issues may be new, the problems themselves aren’t. A study of history reveals that Winston Churchill, Princess Diana, Martin Luther King Jr. many individuals who played a big role in politics, business and entertainment suffered from depression.It was as early as the 1960s when NASA realized that its astronauts were in serious need of mental health care and that psychology and psychiatry didn’t have all the answers.

NASA had then come up with a non-invasive way to capture brain activity, map all its data and then work with the sub-optimal parts through operant conditioning. This was done in collaboration with neuroscientists and now this technique is used to aid war veterans and astronauts. The method used captures brain activity and then modifies certain networks through operant conditioning.

This process involves no psychometric questionnaires and the brain provides the data directly. When your numbers are compared to published benchmarks of normal brain activity, it becomes easy to identify parts of the brain that are not functioning optimally. These networks are then trained subconsciously to function better. The whole process can be compared to a safe workout for the brain which allows brainwaves to correct themselves. There is no use of magnetic waves or electric currents. Sleep, addiction, procrastination, Depression and various other ailments can be tackled with this technology.

According to an HBR study, most CEOs are always in high performance mode, exercising their mental faculties to the fullest. Almost all work more than 10 hours per day on weekdays and 79% of weekends and 70% of vacation days. In order to work in a focused fashion, relentlessly, obviously the brain has to function optimally. This gruelling schedule is essential to the job and thus CEOs have to train, just like athletes do, to prioritize mental health and rest. While most do get close to 8 hours of sleep every day and exercise everyday, more needs to be done to improve mental health.

With a large rise in cases of anxiety and depression in young people, it is evident that we need to do more to preserve and improve our mental health. And considering how important technology has become in managing our health: it is surprising that we’ve gone on so long without asking for concrete data points on brain activity without the exposure to radiation.

Earlier the belief was that the brain is unchangeable once it reaches adulthood. Science has now proven otherwise. One’s brain can change till the age of ninety. The brain produces and loses neuron connections every day. But whether you produce more or you lose some, depends on your lifestyle. ET-ILC members are keen to initiate programs to improve the mental health of those who work in their organizations and want to rely more on technology to provide solutions.

NeuroLeap’s brain enhancement technology uses a brain-computer interface that is connected to your brain with sensors. These capture neuron activity at milliseconds, which means, they’re recording brain waves faster than they become part of conscious thoughts. After the initial 30 minute session, one gets a 24 page report which identifies parts of the brain that are functioning sub-optimally.  NeuroLeap then helps these networks to function better through subconscious training of the brain.This technology does not pass any electric current, pulse or magnetic waves and allows the brain to rework its own neural pathways.