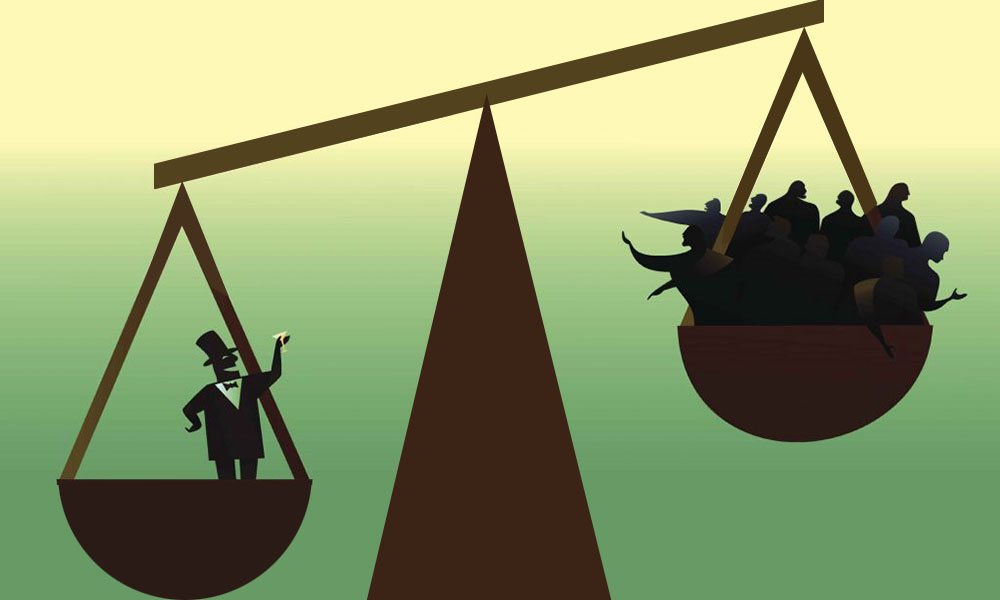 How Invisible Inequality Hurts the Poor

In a lecture at INSEAD’s Europe campus a couple of months ago, Professor Robert Frank of Cornell University argued that pure luck (beyond effort and personal circumstances) would become more salient for professional success and quality of life in the context of a winner-take-all society fuelled by technology (digitalisation in particular) and new ways of doing business. Frank’s argument resonates: Economic and social advantages clearly are disproportionately accruing to the “lucky” few who create the next big start-up or come up wit h a digital idea that goes viral. And top executives are landing astronomical salaries since just a bit more managerial capacity can make the difference between market dominance and total failure.

However, as an academic interested in economic and social fairness, I’m bound to ask whether the “winner-take-all society” is a major cause or merely a symptom of the inequality crisis roiling advanced economies. Could it be that a decades-long decline in social mobility has created a situation in which a few elites are competing for an ever greater share of the pie, making victory so lucrative that it looks as though only an element of luck could explain it?

Mark Zuckerberg, for example, is hardly a case of rags to riches. He started out at Harvard – with all the privilege and access to prized resources that that institution affords. I believe there may be nothing serendipitous or arbitrary about the outsized success of today’s economic winners. It has everything to do with the broader economic situation. If we want to reverse the decline in social mobility and the increase in income inequality, we must view the two trends in both isolation and juxtaposition. Above all, we must consider whether long-standing and worsening inequality produces intangible effects that contribute to the “luck” enjoyed by the chief beneficiaries of globalisation and economic change.

Inequality of income, and of opportunity

When we discuss social mobility, we touch upon so-called “inequality of opportunity” – the ability (or lack thereof) of people to get ahead on their merits, regardless of personal circumstances. Income inequality has to do with “inequality of outcome” – the level of variation in quality of life across a society, eliminating both merit and social status from consideration.

Understanding social mobility requires comprehension of the reasons the rich stay rich and the poor remain poor. Among the most fortunate families, for example, there is a large intergenerational transmission not only of wealth but also of employers, sometimes creating ‘dynasties’ at the top even in countries that are regarded as egalitarian (in Canada and Denmark, more than half of sons born into top-one-percent families worked for companies that had also employed their fathers).

There are other family efforts that give children of well-off parents an advantage, including investing more in “enrichment expenditures” such as summer camps and the like that promote some aptitudes that will be rewarded in the future. INSEAD Assistant Professor Kaisa Snellman calls it the engagement gap. Also, there are two additional intangible elements that are worth mentioning:

Aspirations:Parents with a hard-working ethic endow children with preferences or aspirations to succeed in life. With this view, aspirations, income and the distribution of income evolve jointly. Some children may not have the guidance and culture from their families that encourage university attendance, for instance (there is a large intergenerational transmission of education preferences).

Networks:Many jobs are found through family, friends, or acquaintances (in the United States this would apply to up to half of jobs). Even if children do not ‘inherit’ specific employments (e.g. executive positions in family firms), connections at least help structure a child’s job search. A more polarised and unequal labour market makes this more of a challenge for some than for others and also implies that family connections matter all the more.

The limits of basic income

The largely intangible nature of these advantages summons doubts about how far taxation and ex-post redistribution (based on inequality of outcomes) can go as stand-alone tools for alleviating inequality. Universal Basic Income (UBI), for example, is a way to lessen workers’ pain as they transition from declining industries and skillsets to rising ones. A financial boost like this may help invest in more training. But despite many potential good features of this policy, putting a little money in everyone’s pockets does not raise poor people’s slumping hopes to anywhere near the level that the well-off take for granted.

The formation of aspirations is based on personal reference points and goals, which are reshaped by economic and social context. Poorer backgrounds pave the way for behaviours that lead young people to fail to aspire to their own potential – thus creating behavioural poverty traps(aspirational deficit is a consequence of poverty, not cause). Even with UBI, underprivileged people may not see, let alone seize, the slender opportunities available to them.  The divergence of aspirations in a fast-changing economy may perpetuate inequalities across generations.

Somehow, this vicious circle must be broken. Having access to networks implies enhanced socialisation, which results in more engagement activities (e.g. participating in community activities). Such activities, and the peer influence there involved, can in turn reshape aspirations. How much should governments intervene?

Empirical evidence by the World Bank has shown that communication with motivated and successful leaders can lead to higher aspirations and corresponding investment behaviour. Informal institutional mechanisms – e.g. community-based networks – could be used so that families belonging to the same neighbourhood or kinship group can bootstrap their way out of low-skill occupational traps. The idea is that these networks could substitute for inherited parental human capital and wealth, spurring intergenerational mobility within disadvantaged communities.

The above might work for adults; but how to inculcate aspirations starting in early life? Policy interventions can do little to outweigh any advantages transmitted through genetic traits (e.g. inter-generational transmission of IQ). But they can and do help put children from poorer backgrounds in more engaging environments.

This might also require involving parents as part of school activities since children normally learn by example. Yet, family interventions might be regarded as an intrusion in certain societies. Some voluntary forms of early childhood intervention outside the home, such as access to good quality education, are deemed acceptable in most societies. However, the threshold for removing children from their home environment (even when apparently in their best interest) raises questions about the efficacy of government interventions in private life.

Interventions focused on “inequality of outcome” (such as UBI) are not enough to resolve the larger crisis facing advanced economies. Even if technology leads to more growth, discontent and frustration (e.g. in the U.S. and in Europe) are partly relativistic, and driven not just by a sense of absolute stagnation. If aspirations are largely socially determined, considerations of inequality become paramount. Ensuring that all individuals retain a basic claim on some minimal share of national prosperity, rather than a minimal amount of money as in UBI, becomes the deeper policy question that we need to place centre-stage.

Eduardo Rodriguez-Montemayor is a Senior Research Fellow in INSEAD’s Economics and Political Science Department and is the Lead Researcher of the Global Talent Competitiveness Index.